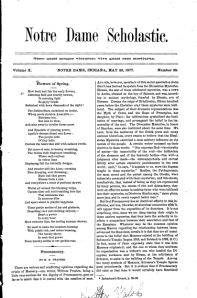 The following is an essay printed in the May 26, 1877 edition of Notre Dame’s Scholastic Magazine. It is well worth reading. To see how the quality of education, writing, and thinking among undergraduates has progressed, one may wish to visit the Scholastic‘s current website here.

Even a casual observer cannot but wonder at the rapid growth of the Catholic Church in the United States during the last one hundred years. At the beginning of this period there were but few Catholics in this country, for although they were persecuted in England, Ireland and Scotland, deprived of the open ministrations of their spiritual pastors in those and other countries, yet they could find just as little toleration in the Colonies at that lime. Until Lord Baltimore and his coloni’ of English and Irish emigrants,—” nearly all of whom,” says McSherry, ” were Catholics, and gentlemen of fortune and respectability, who desired to fly from the spirit of intolerance which pervaded England, and to rear up their altars in freedom in the wilderness,”—there was no religious freedom in America, or at least in that portion of it which is now the United States. This was in 1634 At the same time the Puritans of Massachusetts were persecuting or banishing anyone who.happened among them of a different religious belief; there was no toleration there, and we see Roger Williams and others compelled to seek a home elsewhere or give up their religious belief. In fact they were getting off cheaply enough if they left in sano corpore. The Indians of Maine were hunted down because they professed the Faith of Columbus, and we see them spurning the oft’er of Governor Dudley of Boston in 1713 to rebuild their burned church if they would accept a minister instead of a ” black-gown.” O’Kane Murray in his Popular History of the United States tells us that an act of the penal code of New York in 1700 made it a felony to proclaim one’s self a Catholic there, a few of the penalties being (1) Any Catholic clergyman found within the limits of the Colony of New York after November 1st, 1700, should be ” deemed an incendiary, an enemy of the Christian religion, and shall be adjudged to suffer perpetual imprisonment.” (2) If a Catholic priest escaped from prison and was retaken, he was to suffer death. (3) Anyone harboring a priest was liable to be fined $1,000, and to stand three days on the pillory.’ Another law, passed in 170l, excluded Catholics from office, and deprived them of the right to vote. In 1703, Queen Ann “granted liberty of conscience to all the inhabitants of New York, Papists excepted.” The British Parliament in 1718 passed a law to the effect that any Popish Bishop, priest or Jesuit, found saying Mass or exercising any other part of his office, was to be perpetually imprisoned, and any Catholic convicted of keeping school or educating youth was to be perpetually imprisoned. Thus ” the tyrannical Government of England,” continues O’Kane Murray, “did its utmost to rob every man professing Catholicity of the rights bestowed upon him by the great God of earth and heaven!” This was 84 years after the Catholic Lord Baltimore proclaimed universal civil and religious liberty in Maryland, and 57 years before the breaking out of the Revolutionary War that gained us our independence—that struggle in which the Catholic names of Pulaski and Kosciusko from Catholic Poland,—Barry, Moylan, Montgomery and a host of others from Catholic Ireland,—Lafayette, De Grasse, Rochambeau and others from Catholic Prance, and the gallant Baron de Kalb, German by birth, French by adoption, shine in a galaxy beside those of WASHINGTON, Jefferson, Franklin, Adams, Hancock and the Catholic Carroll of our own country,—and in which the Catholic Indians of Maine, the famed Abnaki, furnished some of the truest and bravest soldiers of the Revolution.

True, the Church has neither done nor instigated these things, has not been the cause of the foregoing acts in the history of the United Stales—for she is inimical to no particular form of government, whether monarchical or republican,—she is a spiritual body, leaving her children free in politics and to any form of government they deem best, requiring only of them what her Divine Founder exacted, namely that having given to Caesar the things that are Christ’s, they give also to God the things that are God’s,— but we think it is enough to convince the veriest blockhead that she in nowise hampers freedom of thought or action when conducted within the limits drawn by the Divine Law, the root and foundation of all beneficial laws, civil or religious. No: although the Church loves liberty, and everything else that tends to the happiness of her children without trenching on the Divine Law, she does not interfere directly or indirectly in the measure or manner in which they choose to have their civil liberty—whether in a monarchical, oligarchical or republican form; these are temporal—her domain is spiritual; they are for time, she works for eternity; she can therefore without partiality take to her bosom a Constantine, a Charlemagne, an Alfred the Great, a Bruce, or a St. Louis, as kings, as she can on the other hand give her maternal embrace to a Hofer, a Tell, a Moylan or a Barry. If our saying so has no weight, at least historic facts should, and would bring conviction if presented impartially. Therefore those who seem to be so much afraid of the growing influence of the Church should set their minds at rest on the matter. Her supremacy is only a question of time, and when it does come it will be the better for all concerned. It is in nowise surprising that the Catholic Church has made such rapid strides in the United States since they became a free country, for the Church is the only true friend of freedom, moral, civil, or religious. She it was that freed humanity from the degrading thrall in which paganism held it at the coming of Christ, that rehabilitated woman, raised her from a condition of the most abject slavery, and placed her as the queen of the household; and she it is who still protects her rights in the matrimonial bond where her benign sway is acknowledged. The Church can only thrive and grow strong in a free country, for she and tyranny are incongenial companions. She gives liberty without allowing it to deteriorate into licentiousness, and this latter is the true reason why she is condemned and persecuted; the two extremes of tyranny and licentiousness are condemned in her code of morals, hence it is that tyrants and profligates are her sworn enemies.

0 comments on “From the archives: The Church and Liberty”