In my previous post I discussed how post-Enlightenment understandings of truth have led us to seek salvation in notional knowledge and to prize analytical-technical reasoning over the more comprehensive human experience disclosed in story telling. In her essay against “healthy homoerotic desire,” Dr. Lu presents “clear explanation[s]” as the “only” response to today’s confusions over human sexuality and criticizes the Spiritual Friendship project for its supposed lack of philosophical precision. I disagree. Story telling is a far more appropriate response to the present situation.

In After Virtue, Alasdair MacIntyre argues that the present state of moral discourse operates with a decontextualized and fragmented vocabulary. Our moral disagreements today are irresolvable, and they devolve into “emotivist” expressions, mere assertions of desires that can’t actually dialogue with opposing views. For example, one side argues for a “right to life,” while another argues for “equality of women.” These sides cannot actually engage each other, because they cannot grasp deeper principles that would serve as a common foundation from which to build a discourse.

The interesting thing about MacIntyre’s account is that morality needs not only shared stated tenets, but also institutions, practices, and relationships to make them intelligible. And to have the tenets by themselves is to render them not only weaker but also largely incomprehensible. We can apply this to the realms of sexuality and loving the poor. What would it mean to understand the “pursuit of chastity,” outside of actual human relationships that provide both the practical and intellectual space for this pursuit, and without which such a pursuit devolves into an individualistic and caricatured “don’t have sex”? And how could we come to know the “preferential option for the poor” when our societies are structured around the avoidance of the poor?

So when MacIntyre talks about our moral debates as essentially emotivist and ungrounded, these are not only characteristics of those who hold views contrary to Thomistic-Aristotelianism. They’re characteristics of everyone who lives in that world today, including you and me. Without the relevant relationships, institutions, and experiences, our moral discourse cannot be anything but impoverished and unclear. And without providing others with such contexts, we can’t really convey to them ideas which are dependent upon them.

It’s not just that our moral discourse doesn’t make sense in the vacuum of modern life. It’s that it can’t make sense. So to insist upon a “clear explanation” as the sole solution to the ills of modern life is actually to run into the same emotivist problem that everyone has. We simply make assertions without the proper conceptual or existential grounding to make them intelligible. This, I believe, is why stories are so important and are, in fact, a necessary precondition for the development of the moral imagination.

The Gospel writers seem to agree with me—and disagree with Dr. Lu—on this point. Indeed, the moral teachings of Christ are always preceded by a narrative encounter with Him. And in the narrative, the encounter is primary and the teaching secondary. It’s the exact opposite of the formulation provided by Dr. Lu, who argues, “Moral clarity is a necessary precondition in embracing the person without fear.”

Rather, embracing the person without fear is the necessary precondition for moral clarity. In Matthew 14, Christ tells us to “be not afraid” even before He invites us to come to Him. Only when we cast out fear can we walk upon rough water.

And this is how Christ upholds indissoluble marriage in Matthew 19. It’s not that divorce violates some abstract authoritarian dictate separated from personal experience. It’s that divorce lives in the moral atmosphere of hard-heartedness, and this hard-heartedness clouds reality. It’s the call to fully and freely embrace that gives moral clarity on the meaning of marriage, not the other way around.

To paraphrase Jesus, “Moses permitted divorce because of your hard-heartedness, but I reject it because of your call to open-heartedness” (for more on this reading of Matthew 19, I would recommend David O’Connor’s Plato’s Bedroom: Ancient Wisdom and Modern Love). The heart precedes the teachings, not the other way around. “Not cheating” should be understood within the context of loving your spouse, rather than vice versa. Indissolubility begins with embrace. And it’s the creative story in Genesis and the redemptive story of the New Testament that reveal this embrace.

Further, the open-heartedness described especially in Matthew 19 and 25 involves an embrace that exists on a different realm from the mimetic opposition described previously. Opposition, with its attendant hard-heartedness, undermines the kind of clarity that comes with the open encounter enabling an embrace.

Biblically, this embrace is revealed in stories that precede “moral clarity.” And the thing about stories is that they must be sufficiently developed before we can achieve clarity on their moral matters. We don’t know the difference between the wheat and the chaff until we have let them grow, but Dr. Lu’s approach to both theology and desire risks burning the field for fear that even a single grain of chaff will take root. But growth, even ambiguous growth, is a precondition of discernment.

This may be why Newman favored a delay in defining papal infallibility. He already believed in the doctrine during the First Vatican Council but opposed defining it at the time. He favored further development of the doctrine before an explicit definition.

Not every word merits immediate defining. And some words elude definition, instead meriting a myriad of descriptions that never actually encompass the reality, necessitating even a via negativa. Persons are like this. There will never be words to encompass Christ, who is the Truth, even if He elicits unlimited description. There is no definition to precede Him, though endless words can follow His encounter. And if He who is the Truth eludes definition, we should think carefully before we begin to identify either truth or salvation with defining. Christ first comes to us in stories, and in the dialogue of prayer.

These inquiries into the approach presented by Dr. Lu’s “Eros Divided: Is There Such a Thing as Healthy Homoerotic Desire?” are only a starting point in responding to what I find to be a misleading, under-researched and, frankly, condescending essay. I have not yet covered in depth the substantive question presented by Dr. Lu. But I believe that the concerns I have brought forward raise questions as to some fundamental intellectual commitments of the essay that should be explored in order to better understand the problems that occur with its approach to sexual ethics.

A response to the specific substantive question of “homoerotic desire” would have to be comprehensive and explore it from a variety of perspectives. Much could be said about how her presentation of erotic love seems to draw from Freudian commitments, rather than the broader Western tradition extending from Plato’s Symposium to Pope Benedict XVI’s Deus Caritas Est. Much could be said about how she seems to treat the language of “intrinsically disordered” in a contemporary psychological framework, rather than in a classical teleological framework. More could be said on how her approach seems to undermine the practice of prudence, replacing it with the broad strictures which Hannah Arendt identifies with the modern world’s social realm. I will leave these responses, however, for a later time and instead invite the reader to explore his or her own fundamental commitments, in hopes that we can come to these specific questions from a more grounded place.

More in this series: 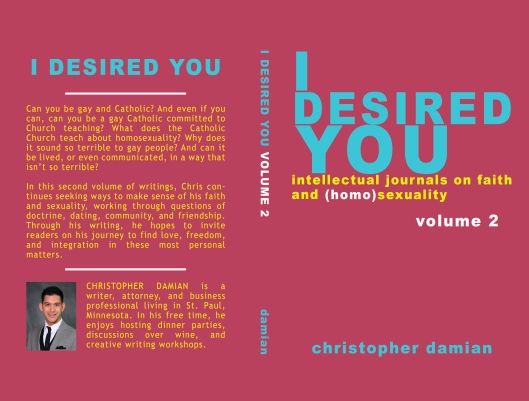